On of the items I made for my local Montessori school for the start of 2019 was a few items for their First Great Lesson. If you are not sure what that is click here.

I mainly create things for the younger classes which has children from ages 3 to 6 years in them. So fairy easy and still in the play stage of development.

While on Pinterest I came across some stones that had the planets on. They were painted black and white speckles on them. Im not keen on painting on stones as I prefer to work with items that are more flat and easier to work on. And me and speckles never turn out to look like speckles just big blobs of paint. So I changed it up to suit me.

I bought these laser cut circles from Ebay. When they came they were perfect! And that is what I used to paint the planets on. 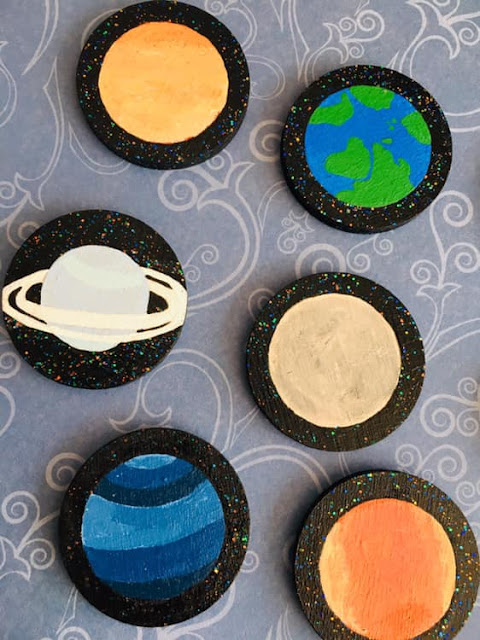 I painted them white first. I always paint everything white as it give any paint colour a boost of light beneath it.

I then painted the planets....I just used images from Google to use as a reference and made them a bit more child like and slightly different so there was a difference for the children to see. 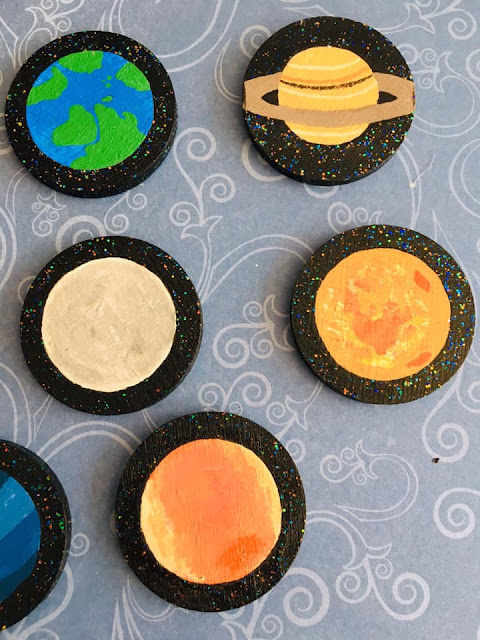 After that I painted round the edges in black...very slowly to keep the circle shape of the planets. I didn't want to paint the planets onto a black surface as that would dull the colours. 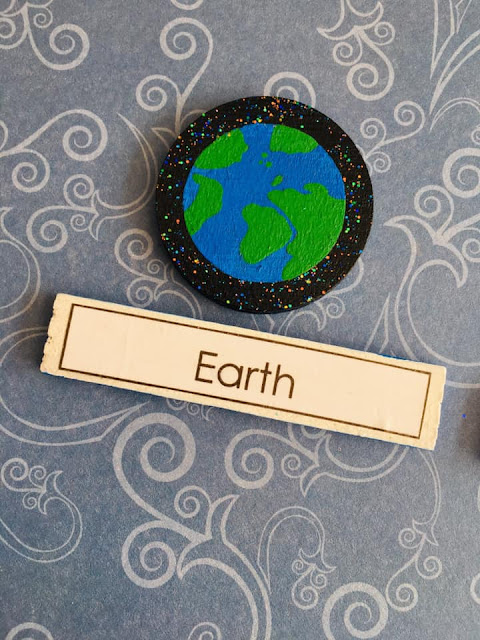 I knew I wanted to add some sparkle instead of flecks, so I grabbed my this Modge Podge ( which I love and would cover my whole house in ) 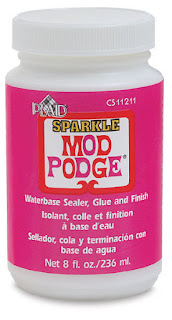 The words of each planet were typed out and adhered to some play bricks. I once bought two packs of children bricks. They have been brilliant for anything I want that is cubed. But they had some long thin ones as well and they were perfect for the names of the planets. 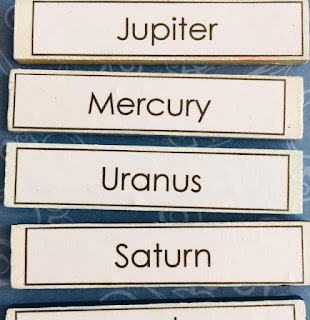 As with all of my educational creations that I make the activity has control and error for the children to check if they are correct. So each planet and name has the corresponding colour on the back. 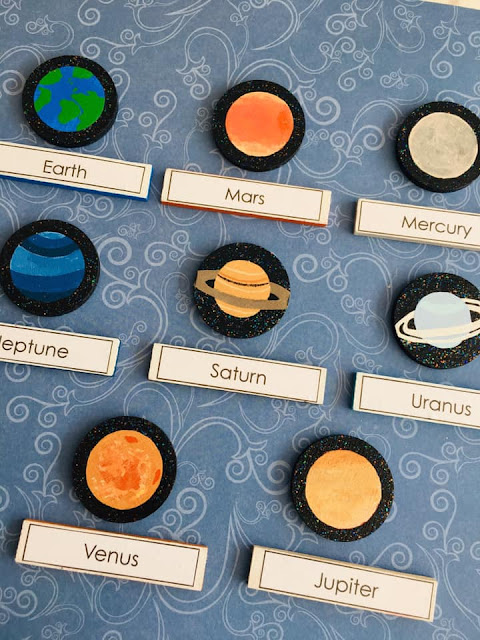 Now I know true Montessori people would say this next step is not needed but I did it anyway. 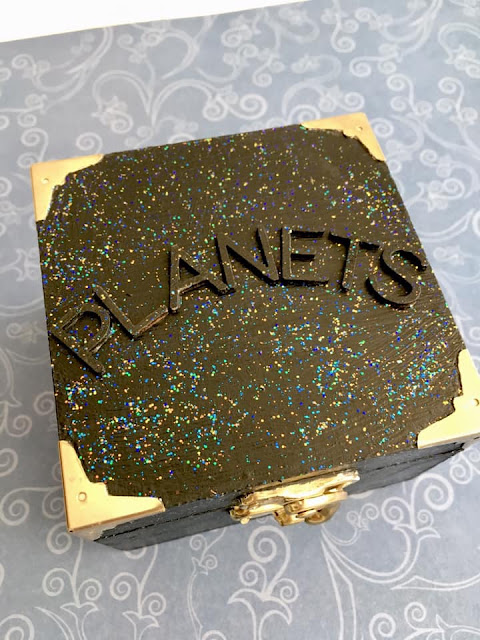 The activity will be put on the shelf for the children to access in a basket as with all other activities or in a plain box. But they have to be stored in something in the store room when they are not being used and I don't like the idea of them being in a plastic bag...So I made a Planets box to keep in them, so they are all safe together. 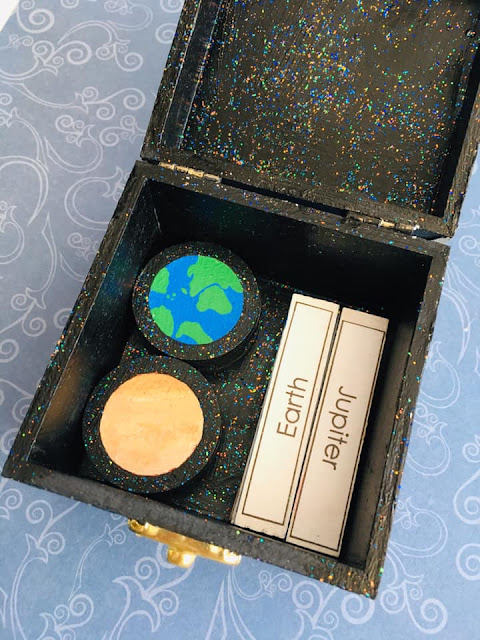 I spend a lot of my summer wondering round boot sales. The things you can find for 10p to use, adapt or alter is amazing.

I found this little box for 5p on one of the tables. It was painted pink but I just painted the whole thing black to keep to the space theme.

Added some letters to spell the word planet....now.... I know that it should have been in lowercase letters. But I really struggle to find lower case wooden letters anywhere. But as it was just to keep them in I figured it didn't really matter. 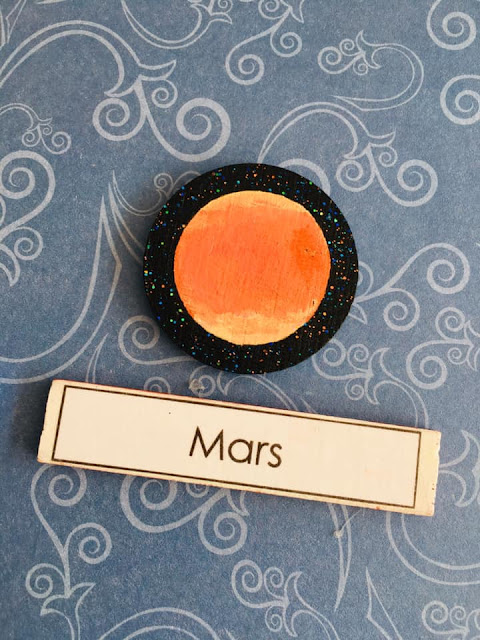 Re painted the whole thing black again and added the same Modge Podge onto the entire box, inside and out.

I hope the children like it. I think things like this last longer than the normal Montessori cards that would have been printed off and laminated. Add a grey mat for the children to use and it was done!

I also made a space peg doll diorama which was made on a wooden base that started life as a bread board! so stayed tuned for that.

My son is attending the World Scout Jamboree this  year. He is off to New York then The American homebase for Scouting. He is also off to Washington and Canada.  He had to go through a selection process and an interview to be selected for this. And I was so proud when he was one of the few scouts that were selected.

We are nearly done though and my husband who is a scout leader and my son have worked so hard to make this happen. One of the things I have made over the last year to help raise money for this was this Gingerbread house.

It was made and then sent to my local Montessori school on their annual Christmas carol evening to be raffled off and the money made put towards this trip.

Here is what I came up with. ( sorry for the bad photos, they were taken on my iPhone before I got my new camera ) 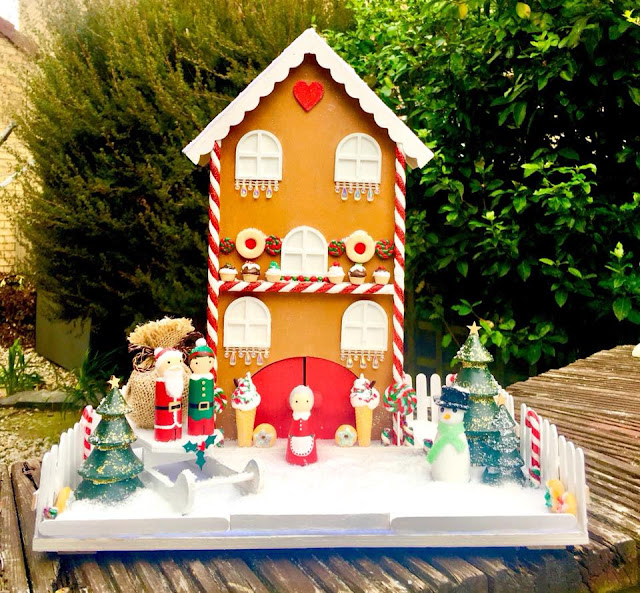 The original house looked like this...I bought it from The Works and the link is here.
Considering how cheap it was it was really well made. When I saw it I didn't see fairy house I saw a Gingerbread house and kept the thing for nearly a year until Christmas came round again. 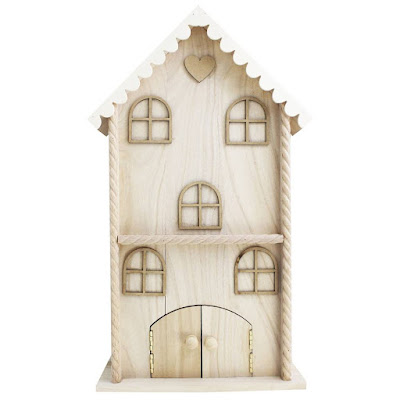 I didn't have any small chocolate or sweet treats to put on the house. And I do like to keep my pre made parts on my creations down to a minimum as much as I can...so I spent on of my days on this using fimo to make all the biscuits, ice creams, cakes and candy canes. The hardest to make was the candy canes...turns out I'm not that great at rolling limo and keep the stripe look! 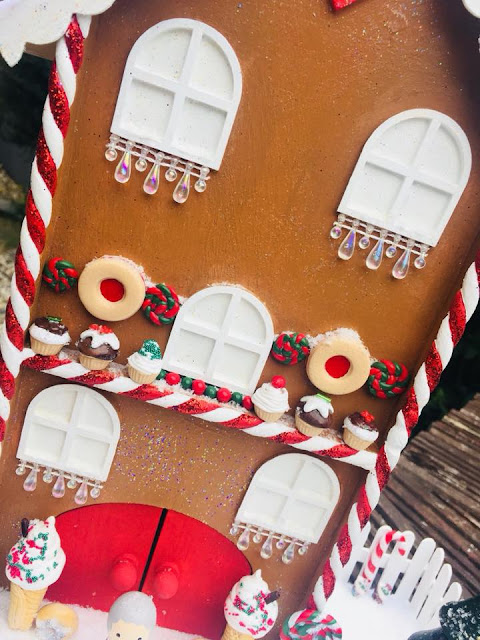 Santa and his elf are made from peg people. Some cotton wool for his beard was a very quick and easy thing to make!
The big sleigh was a christmas decoration from The Range. I did try to make my own...hmmmm the didn't turn out just right. And while shopping I came across the sleigh. It was only a few pounds and painted white it turned out to be perfect. 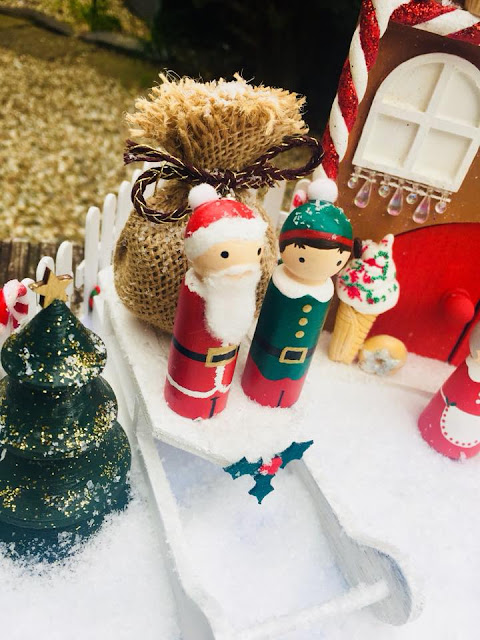 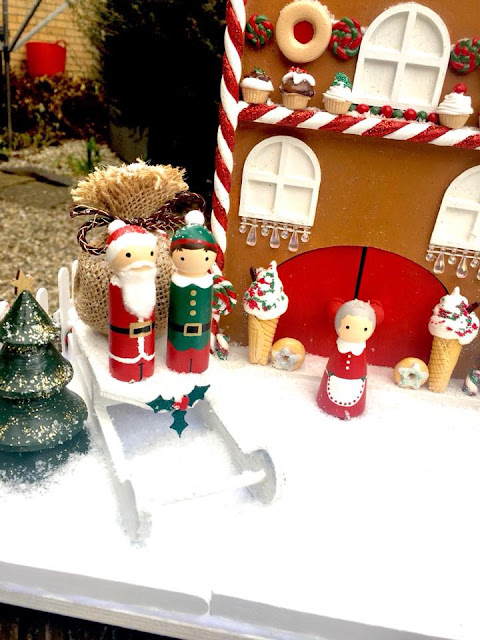 The snowman was also a peg doll. I just made a felt hat and limo carrot for his nose. Add a scarf and some snow and I was done! 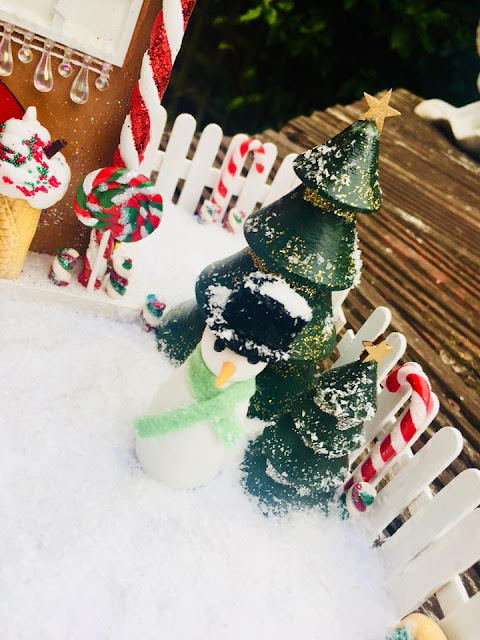 The wooden fence round the edging was made with small lollipop sticks cut up and stuck together with hot glue. I wanted it to add a nice touch to the scene but also the fake snow that was added at the end needed a barrier to stop it from falling off. 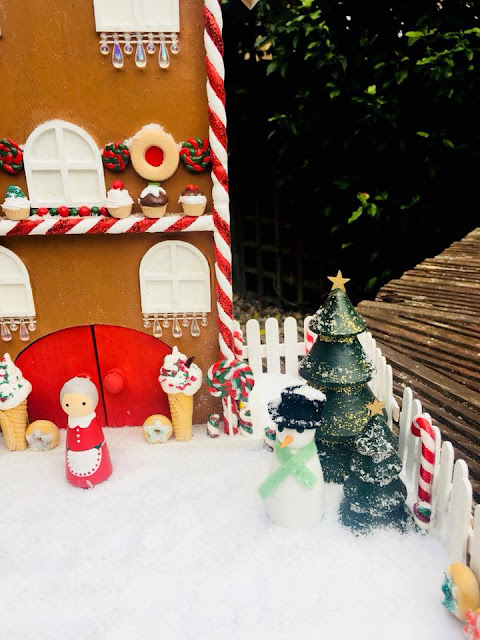 The whole base of this was built on one of these from Hobbycraft. 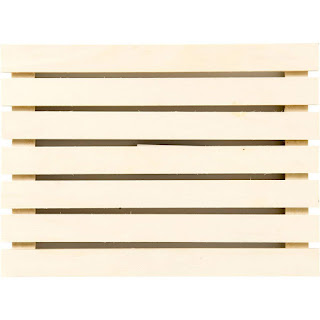 As you can see from the photo below I also added some lollipop sticks around the edge of the base at the front as well to stop the snow from coming off. 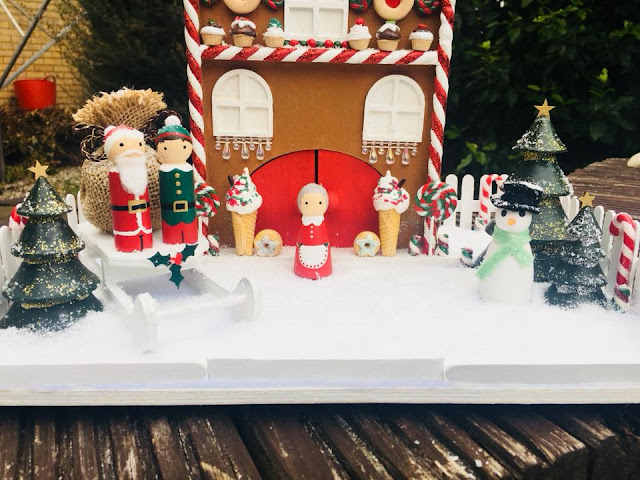 All in all this took me over a week to make and I was really sad to see it go. But I know that the family who won it in the raffle would have loved it.

Email ThisBlogThis!Share to TwitterShare to FacebookShare to Pinterest
Labels: Christmas

Picture the set up....a freezing cold or boiling hot  ( depending on the time of year ) conservatory...a ton of boxes and drawers full of 'stuff' I have collected over the years. A table full of paint stains and glue marks. A tv with a dvd player...yes a dvd player. My son always rolls his eyes at that one and tells me to move into 21st century. Being 15 is hard when you mum is so uncool apparently!

I play terrible sci fi movies or bad horror films...and while not really watching them I make the  things that come into my brain.

Do I have a need for most of the things I make? Not really. I try and give them to people when I am done. I hand them out for raffles etc. The educational stuff I make mostly goes to my local Montessori school that I used to work at. So I try and make it with that in mind.

Mostly I just browse the internet and find interesting things to make and put my own spin on then.

My name is Wendy. I live in a village in Suffolk . I post my crafty endeavours on here! and hope to give you some inspiration . You can find me on instagram for more projects...Wendy house. If you need to get in touch please feel free to email me- myownwendyhouse@gmail.com